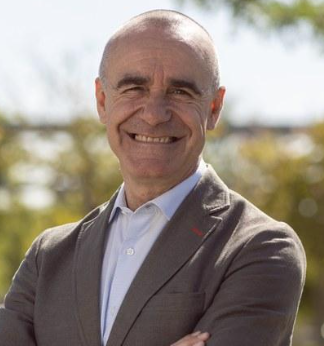 The mayor of Seville, Antonio Muñoz Martínez, was born in La Rinconada in 1959. He has been part of the Municipal Corporation since 2011, and before being appointed mayor he has managed the areas of Tourism, Culture and Urban Planning for six years as deputy mayor of the city government.

He has a degree in Economics and Business Sciences from the University of Malaga, and an MBA from the San Telmo International Institute (Seville). Expert in Local Development by the International Labor Organization and the United Nations.

His professional career has been linked to the management of public resources, tourism promotion and the revitalization of economic activity. Thus, he has been Director of Finance for the Provincial Council (1993-1999); director of the Economy and Tourism area of ​​the City Council (1999-2002); Director of Tourism of the Province of Seville (2002-2004); and General Director of Tourism Planning and Management of the Junta de Andalucía (2004-2011). Between 2011 and 2015 he was a councilor and spokesperson for the Socialist Group and between 2015 and 2021 he was a delegate for Urban Habitat, Tourism and Culture of the Seville City Council, also assuming the position of spokesperson for the city government.

During his municipal management in these areas, priority has been given to the international promotion and projection of Seville, cultural programming, the development of large public and private investment projects, the recovery of heritage or the complete reorganization of administrative operations to promote streamlining, simplification and modernization in the processing of licenses and attracting investments.

Since January 3, 2022, he has assumed the Mayor’s Office of Seville as the candidate of the most voted political party in the last municipal elections of 2019, prioritizing the improvement of public services, the reduction of inequalities, the ecological transition and the fight against climate change and economic recovery.