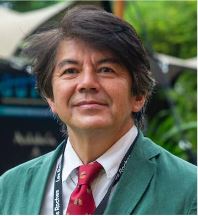 He has been active at ILEWG (International Lunar Exploration Working Group) as president (1998-2000), and initiator of ILEWG MoonVillage initiative since 2000. He has been Co-Investigator of space projects such as SOHO, XMM, BIOPAN, SMART-1, Mars Express, COROT, ISS/Expose. He has published over 650 articles, including 225 refereed papers, in lunar and planetary exploration, solar/stellar physics, complex organics in space, astrobiology, instrumentation. He edited 16 books and organized over 75 international conferences and symposia. His most cited papers include the discovery of fullerene C60+ and diffuse bands in space, CoRoT-7b: the first super-Earth with measured radius, Tropical glaciation on Mars, multisite continuous spectroscopy of stars.

Born in France, he was admitted at Ecole Normale Supérieure of Education & Technology, and became Professor Agrégé of Physical sciences. He obtained a PhD on Astrophysics and Space Techniques using a sounding rocket ultraviolet camera experiment at CNRS, with research stays in the US (Lockheed, SacPeak, Boulder, Harvard). He worked 3 years in Chile as astronomer for ESO European Southern Observatory, the French embassy, and as Professor of Astrophysics. Permanent researcher at CNRS Institut d’Astrophysique Spatiale, he obtained the Habilitation for direction of research in 1990.