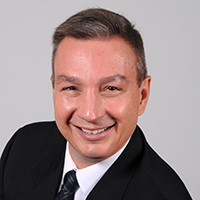 President and Founder of Swiss Space Tourism, highly passionated about space conquest and space tourism, he acquired pilot skills at the controls of airplanes, helicopters, seaplanes and gyrocopters. Former Deputy Director of Ground Operations in business aviation, trained as a flight dispatcher, he also worked as a simulator pilot for Skyguide as part of the training of air traffic controllers. Private cosmonaut training in Star City, Moscow in 2016, 2018, 2019 at the Gagarin Cosmonaut Training Center provided him with knowledge and skills to plan his own Space Mission, SST-6 ( Swiss Space Tourism-6) which will have to be financed with the help of sponsors/financial partners/donations in order to take off as from 2023 on board a New Shepard rocket from Blue Origin, being accompanied by 5 space tourists who will have been selected by the main sponsor. The goals to be achieved for Swiss Space Tourism are :

Excellent communicator, persevering and visionary, I put my skills at the disposal of all people or companies wishing to promote their activities in the field of space tourism.