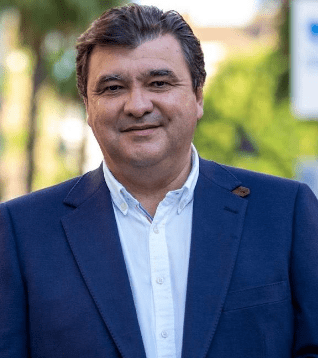 Graduated in Law from the University of Seville (1988). He practiced law for 14 years without interruption. He has been at the head of several provincial delegations of the Junta de Andalucía in Huelva since 2004, being a delegate of Justice and Public Administrations from 2004 to 2006; delegate of Public Works and Transportation from 2006 to 2008; and Delegate for Housing and Territorial Planning from 2008-2012. Between 2011 and 2015 he led the socialist municipal group of the Huelva City Council, as spokesperson.

He is also vice president of the Andalusian Fund of Municipalities for International Solidarity (FAMSI), and since 2015 he has been part of the Executive of the Spanish Federation of Municipalities and Provinces (FEMP), assuming the spokesperson for the socialist mayors and councilors of the country. It is also a member of the National Commission for Local Administration and the World Network of Cities and Local and Regional Governments.