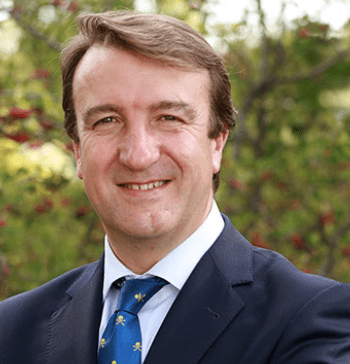 Agricultural Engineer from the ETS de Ingenieros Agrónomos de Madrid and Technical Agricultural Engineer from the EUITA in Madrid, Master MBA and X Leadership Program for public management from IESE. He was born in 1967 and has lived in Tres Cantos since 2000. He has developed his professional career as a Large Account Sales Engineer at ICL FUJITSU, SERVICOM, RETEVISION, and is currently on leave from Vodafone.

From a very young age he was attracted to politics and joined the Popular Party in 1986. José Folgado called him in 2007 to be his number 2 on the electoral list of the Popular Party that attended the Municipal Elections in May of that same year. With the victory by absolute majority, the first of a party in the history of Tres Cantos, he became the third deputy mayor and councilor for Urban Planning, Works and Services. In those four years, Moreno carried the weight of the great actions carried out in the city and that have achieved a very positive transformation of Tres Cantos (Cleaning shock plan, remodeling of streets and avenues, recovery of the Central Park and the parks and sectoral gardens, burying containers, planting more than 4,000 trees, unstoppable progress of the new urban development in the north, etc.).

In May 2011 it was again number 2 of Folgado for a new appointment with the polls, endorsed with a reinforced majority of the Popular Party in Tres Cantos. Thus, from June 2011 to March 2012 he was second deputy mayor and councilor for Urban Planning, Infrastructure and Housing. Since March 21, 2012, he has been the mayor of Tres Cantos after the resignation of José Folgado when he was appointed President of Red Eléctrica de España (REE).